‘I SAW YOU’ in Mark Ghuneim’s ‘Surveillance Index’ 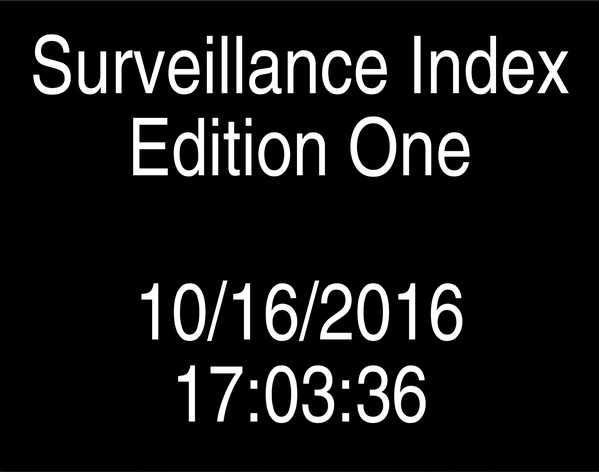 ‘I SAW YOU’ (pub. 2007) amongst elegant heavy-hitters in Mark Ghuneim’s ‘Surveillance Index’, Edition One,
a collection of one hundred books related to surveillance photography, with a canny essay by Carlo McCormick ... launched at the New York Art Book Fair this past September ... @MarkGhuneim

... an excerpt from Carlo McCormick’s essay
“As these cameras continue to populate our cities, we must ask ourselves how many are enough, and what exactly needs to be watched to guarantee our security. SpY, an artist based in Spain, brought this question to a hysterical extreme when he installed one hundred surveillance cameras on the side of a building. But it was the French prankster known as The Wa who found the liminal space in this field of vision with his 2012 piece in Warsaw, Master Piss, in which he documented an unseen crime, in the form of a puddle of urine, exactly between two CCTV cameras pointing in opposite directions down a long corridor. Like many crimes committed in protest of this surveillance state, the evidence is not collected by the invasive architecture of CCTV cameras but documented like little ruptures in the surface of control by the artists themselves. We must ask what the real utility of this perpetual recording ultimately is. We see the atrocities of the world as an ongoing stream of surveillance incapable of producing the empathy or the understanding we need to bring an end to the violence. While these grainy shots that show us glimpses of terror before breaking off in bright flashes of explosive destruction may have some forensic, investigative value after the fact, seeing does not equal prevention here any more than the erosion of privacy increases safety. Rather, now we have on this CCTV planet a vast monument to our collective fear, an unfeeling, unthinking, and unworthy witness to the trauma of being.”