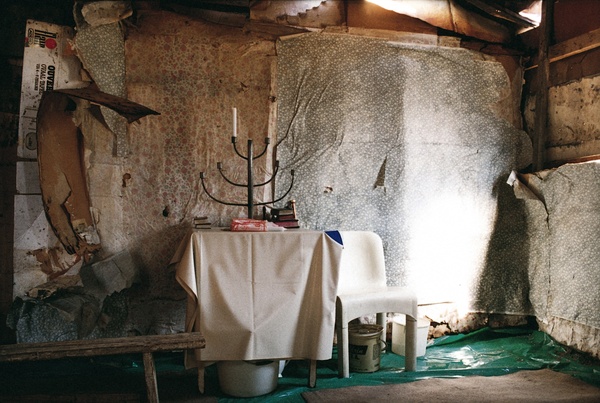 “On Obed’s advice, I take some MANDELA—THE PEOPLE’S CHOICE posters from the boot of the car and sit them across the rear window tray. “When we’re out walking, they’ll think it’s an ANC car and leave it alone,” he says. We stroll into the narrow, sandy pathways between shacks, Obed behind me always. There is intricate wrought-iron work forming gates and security windows. We must be crossing private property, or at least neighbourhood territory, but no one checks our walk. Obed passes the time of day with some of the locals. They’re keen to know what’s happening and one old man, drunk on corn liquor, shouts, “All Blacks! All Blacks!” We all laugh.

Through a shack door, open in the heat, I glimpse the most unexpected wallpaper. Printer’s sheets of can labels: fruit cocktail, halved pears, apricots in rich orange with slashes of blue, right up the walls and across the ceiling, placed with the rough care of student wit. But this was a family home. Uplifting again. Would they have giggled? Obed asks whether I can photograph inside. Yes, I can, they don’t hesitate. After the photographs, it doesn’t occur to me to ask, why this wallpaper or where it’s from. Or even to talk. I smile and nod an inadequate thank you” ... /complete text