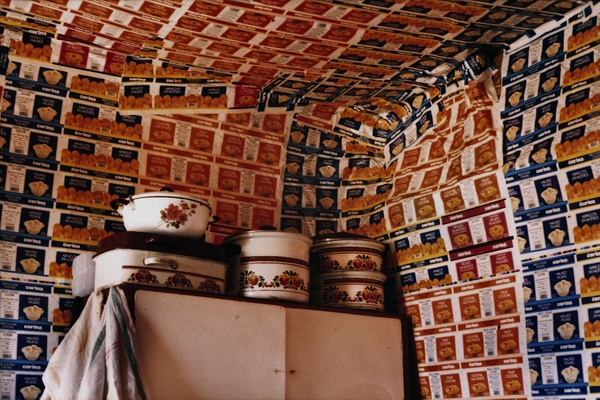 “Through a shack door, open in the heat, I glimpse the most unexpected wallpaper. Printer’s sheets of can labels: fruit cocktail, halved pears, apricots in rich orange with slashes of blue, right up the walls and across the ceiling, placed with the rough care of student wit. But this was a family home. Uplifting again. Would they have giggled? Obed asks whether I can photograph inside. Yes, I can, they don’t hesitate. After the photographs, it doesn’t occur to me to ask, why this wallpaper or where it’s from. Or even to talk. I smile and nod an inadequate thank you.

Round the next corner there is more. LUX soap packets offset with a ceiling of coffee jar labels. And the Mandela poster that protects our car is here on the wall amongst the repeating images of the Hollywood LUX woman. There is a small television—I can’t recall whether colour or black and white—run off a Bosch car battery.

Moving from shack to shack, I discover further fruit cocktails, green this time, and pear halves, a living room of supermarket junk mail, again carefully aligned, kapow! with colour and design. Is this a neighbourhood thing or is it throughout Khayelitsha and the other squatter camps? I have no idea and neither does Obed” ... /complete text