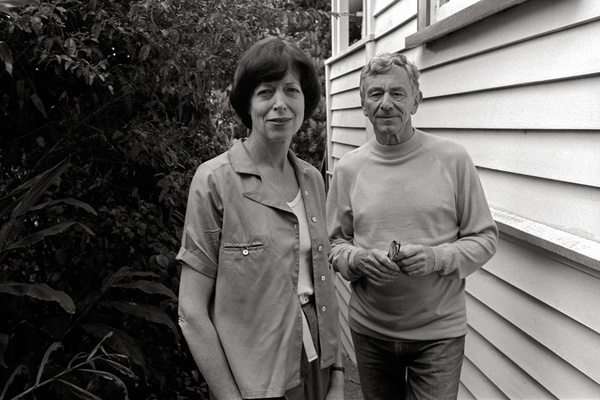 My simple portrait of two extraordinary people, February 1983. Jenny Curnow, once Miss Tole, my history teacher when I was a 15-year-old. She disappeared from school for a short while, and returned as Mrs Curnow, the second wife of the great New Zealand poet Allen Curnow, or Whim Wham, as I was raised to know him from his regular satirical poems in the ‘New Zealand Herald’  when newspapers were robust, and the Vietnam War was winding up, and apartheid too, and New Zealand was yet to look hard at its stifled history.

‘Simply by Sailing in a New Direction’, Terry Sturm’s recent big biography of Allen Curnow, in a two-book set with Curnow’s ‘Collected Poems’, edited by Elizabeth Caffin and Terry Sturm

“Poetry was not simply what happened as a consequence of thinking. It was the place where thinking was done.” .. a super line from a super review by Vincent O’Sullivan.