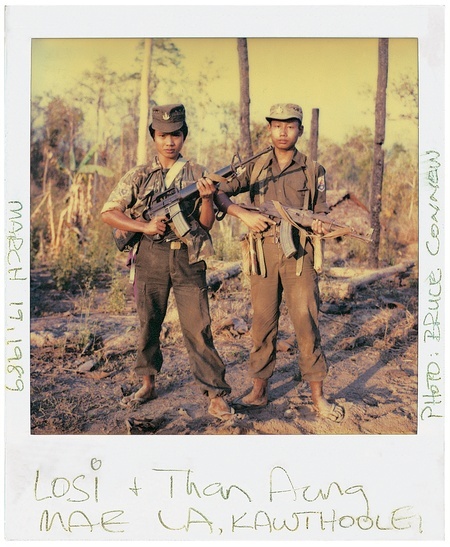 Now, at the Port of Auckland, NZ Customs are to inspect ‘folded eggs’ ... perhaps the title suggests undeclared food, or maybe it’s the essay reference to New Zealand’s colonial wars ... the last artist book they checked was ‘I Must Behave’ ... I turned that inspection into an artwork.

In the meantime, a 1989 Polaroid of two young Karen National Liberation Army soldiers tasked with my protection at a trench position in Burma not too far from the Thai border. I took with me an SX70 Polaroid camera so I could gift images to those who helped. I ran out pretty quickly. The FM2 meant, “. . . the two teenagers moved quickly together, entwining their arms for a photograph they must have known they would never see.” ... from ‘On the way to an ambush’ (1999).

‘folded eggs’ UPDATE
The book printed late May 2018 for a September release with @photoq_bookshop at Unseen Amsterdam ... Vapour Momenta Books will continue to offer the regular edition at NZD$35, and the special edition with artist print at NZD$55, free shipping worldwide, until after the New Zealand launches, Auckland and Wellington, mid-December 2018.

The next showing will be at Friends With Books Art Book Fair, Friday, October 19, Hamburger Bahnhof Museum, Berlin, sharing a book table with out-of-Berlin photographer/daughter Alice Connew (‘43’, 2017), Gloria Books. Then during Paris Photo 2018 with the inimitable Andrea Copetti, Tipi Bookshop, Brussels, aboard Sebastian Hau’s pumping Polycopies on the Seine.

Then two launches back in New Zealand after mid-December 2018 at Lela Jacob’s The Keep, Auckland and at Angela Gordon’s The Service Depot, Wellington. That’s it ... perhaps!