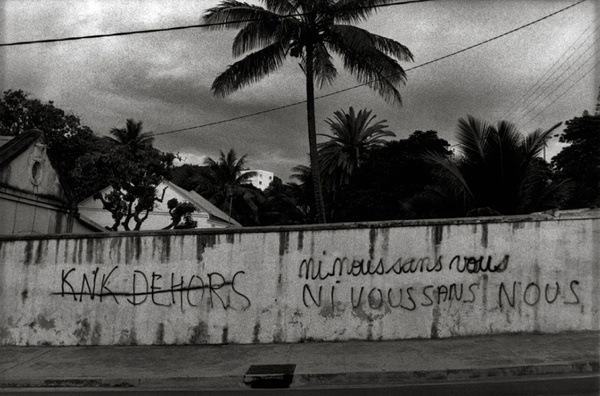 I would like to use a photograph taken by Bruce Connew in Numèa (Nouméa) in 1984 as an example of “thinking-doing” in the public space.

The caption of the photograph written by Vernon Wright provides us with some context: New Caledoniain general and Noumea in particular are almost defined by graffiti. Add to it the political polemics and the glib irrationality of race and there is a picture of a troubled society, which is more to the point than the tourist images of bikinis, beaches, bathing and boats, New  Caledonia, December 1984.

In this black and white picture, Bruce Connew captured a dialogue. The first graffiti in capital letters reads “KNK DEHORS” (“KNK  OUT”), referring to the racist colonial spatial policies keeping Kanak and non-Kanak separated, especially in Nouméa, the capital. The text is then crossed out, and next to it is written “ni nous sans vous” in small cursive letters and below “NI VOUS SANS NOUS” in capital letters (“neither us without you, NEITHER YOU WITHOUT US”).

The exchange inscribed on the wall opens with a pull toward the logic of separation and segregation of modernity / coloniality and toward Indigenous disappearance required by settler colonialism. Indeed, as Native feminist scholars Maile Arvin, Eve Tuck, and Angie Morrill (2013, p.12) argue, “[i]n order for settlers to usurp  the land and extract its value, Indigenous peoples must be destroyed, removed, and made into ghosts”.

The response to this violent injunction for Kanak to vanish from the settler space is the crossing out of the words - the first graffiti is not erased with paint, nor sprayed over in a way that would make it unreadable, which signifies a wish to be in conversation, to respond and to stay with the first utterance, but also not to ignore the history and reality of racism and settler colonialism the first message is embedded in - and the proposition of a different worldview, that of radical relationality, that orient us toward a humanizing of both Kanak and settlers.

At the same time, the fact that “NEITHER YOU WITHOUT US” is written in capital letters signals an acknowledgement of the imbalance in power dynamics and puts the onus on settlers to see and acknowledge their relation to Kanak. The relational character of the response is “shaped by the relational values and principles of the Pacific itulagi [lifeworld], such as the embodiment of life, interconnectedness of all, harmony, dialogical communication, practical reciprocity, reception of the other who is different, as well as truthfulness” (Vaai & Nabobo-Baba, 2017, p. 11; see also Vaai & Casimira, 2017) and is reminiscent of the notion of Ubuntu.

In doing so, the response moves us in a different direction, it delinks, and it shifts the geography of reasoning (see Mignolo & Tlostanova,2012,p.12) from western epistemology to a Pacific perspective that centres the communal. “neither us without you, NEITHER YOU WITHOUT US” (re)affirms Kanak existence in the city and in the country more generally, an existence that is weaved to settlers’ who are being challenged to unthink themselves in order to rethink themselves relationally.

The response goes against separation, colonialism, and racism. It proposes another possibility in which settlers cannot be uncoupled from Kanak and vice-versa, therefore, changing the terms of the conversation.

(Anaïs Duong-Pedica is a white-Vietnamese PhD researcher from Kanaky-New Caledonia (KNC) temporarily based in Finland. Her thesis is on the politics of mixed-race identity and settler colonialism in KNC. She currently teaches on whiteness, womanhood and feminism and participates in anti-racist and anti-colonial interventions in/from Finland.) 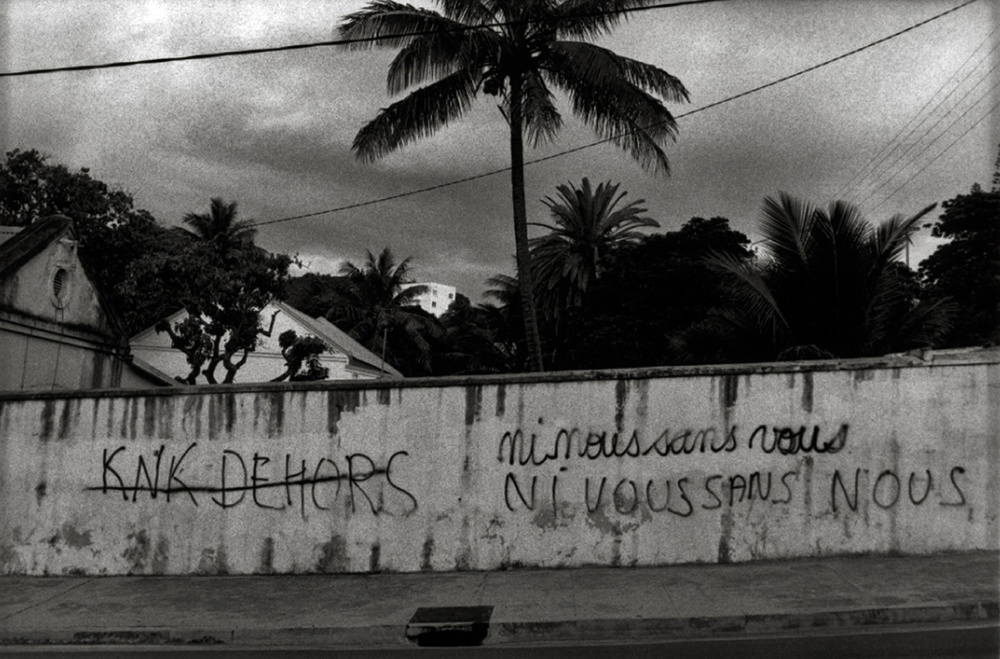