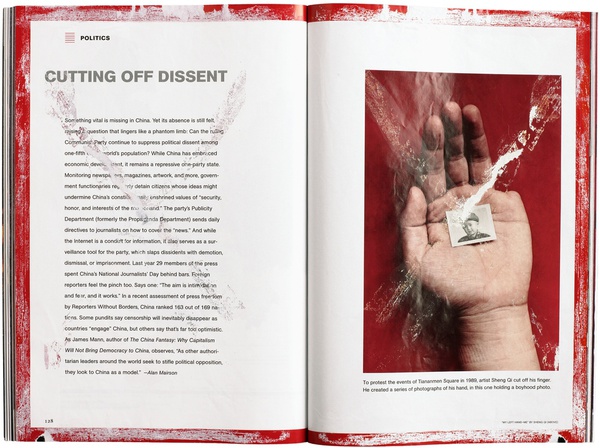 “...on the cover of the latest issue of UK literary magazine Granta...”

The work of New Zealand photographer and artist Bruce Connew features on the cover of the latest issue of UK literary magazine Granta (#105, Lost and Found, Spring 2009). Censored 2008 is a photographic artwork that began as a censored copy of National Geographic magazine’s May 2008 special pre-Olympic Games issue on China, which Connew discovered plastic sealed in a Zhongshan, China bookstore, around the time of the Sichuan earthquake. Flipping through the magazine at his hotel, Connew stopped on page forty-six, “Two and a bit lines on the left-hand page had been crossed out in heavy black ink. Censored, I deduced &mdash it was not long until the Olympic Games. Everywhere else in the world people were discussing whether the Games would provoke change in the Chinese government, but China is China.” Continuing through the magazine, he found that pages were glued together, crossed out, or removed altogether — he then had an epiphany: “Mulling over the layers of art and politics involved, I realised I had unwittingly prepared an artwork of my own, right there in the Louis Hotel. I had three of the spreads photographed to produce a political triptych (Censored 28), three large pigment prints each twice the size of a National Geographic double-page spread; my personal recontextualisation of these pages.” (May/June 29)